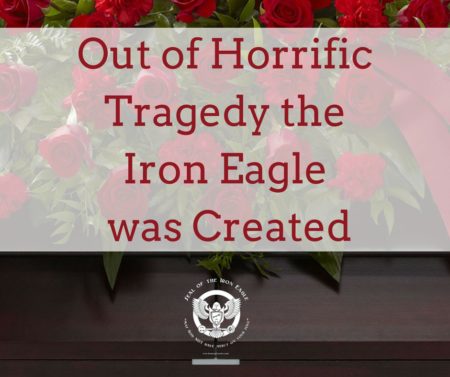 In this week’s installment of the justice files, I shared just how Special Agent John Swenson aka The Iron Eagle was birthed in my imagination. I am now sharing that same message with all of my additional readers here on the blog.

An Atypical Fictional Hero Inspired by a Real Life Tragedy

It was Friday before the long Memorial Day weekend in 1979, and I was in ninth grade in junior high school. I was getting lunch in the cafeteria when Thomas (Tommy) Glenn Lundgren  popped up in the lunch line next to me sporting a cast on his arm that he had painted with a rainbow in art class a few hours earlier.

Tommy was a redheaded, freckle-faced kid who loved skateboarding, hanging out at our local skate park, and occasionally got into trouble as did I. He was a small part of a group of fringe friends who I hung out with and one hyper little guy.  He was a year younger than me, but we had been in the Boy Scouts together and had known each other since elementary school.

Tommy showed me the cast and said, “Cool, huh?”

He laughed, and we got our food, sat, and ate. He told me he was going to have some pictures taken of him at the local skate park, “Skater Cross,” as I recall. He said that he was going to be in magazines. I laughed it off, and when we finished lunch, he made one of his usual comments, which got him punched in the arm—a punch that he reciprocated as he laughed and ran off.

That was the last time I saw Tommy alive.

The weekend went on without any major drama. My old man was an abusive alcoholic, and my late mother was an alcoholic and speed abuser. My two younger brothers lived in their own world. I ran a small business mowing yards for a couple of local realtors, and I had a few neighbor kids who worked for me. The bucks we earned went toward pizza and sodas. We were nerds and not into drugs.

Tuesday morning was uneventful until lunch when one of my female classmates ran up to me in the cafeteria and asked, “Hey! Did you hear the news?”

“Your little friend Tommy is dead!”

I told her she was full of crap and started asking around school, but there were mixed messages. When I got home I opened the newspaper to see a snippet news story about the day before.

“Body of teen found on hiking trail in Agoura.” The small article described what the male child had been wearing when found, and then my blood ran cold.

“The boy had a bright multi-colored cast.”

The body was Tommy’s, and he was the first victim of William Bonin aka The Freeway Killer who would terrorize Los Angeles for over a year, raping, murdering, and emasculating teens and young men then dumping their bodies alongside the freeways of the San Fernando Valley and other locations. What little innocence I might have had left was gone with Tommy’s murder. I grew up fast as did everyone who knew him. There were no counselors for kids in those days. Shit happened, and you just had to deal with it.

A Protector and Punisher Is Born

Growing up the way that I did in a massively dysfunctional and abusive home leaves its mark. And contrary to what some people think, people can not only survive trauma, but they can also thrive and use it to their advantage in life. I started to write about a character who would bring justice where justice could not be brought and give closure to those living in the darkness of abuse and neglect.

I wrote story after story through the 80s, 90s, and early 2000s. I had the protector but didn’t know who he was. He wasn’t a superhero. He was flesh and blood, smart and well trained, and had compassion—a trait not found in a killer.

In the winter of 2013, I was up late writing on an unrelated topic when I saw him in my mind’s eye. My dog Chester was sleeping on the floor next to my desk, and our cat Oscar was up in my loft as well (rare in winter). My wife was sleeping downstairs in the bedroom. I opened a new Word document and typed the words, “What is an Iron Eagle?” and as I navigated the first several chapters of what would become the first novel in my series, I came face to face with John Swenson—a handsome, well educated, at that time LAPD homicide detective with clear blue eyes and a strong build.

I shook my head and said in my mind, “No. I’ve come to give you life, so that you can protect the people of Los Angeles and beyond.”

It was 3:45 a.m. when John Swenson came into my life, and the Iron Eagle was born.

PS: Evil and the Details: The Iron Eagle Series Book Two is dedicated to the memory of Tommy.

No trackback or pingback available for this article