How The Iron Eagle Series Combines Fiction with Reality 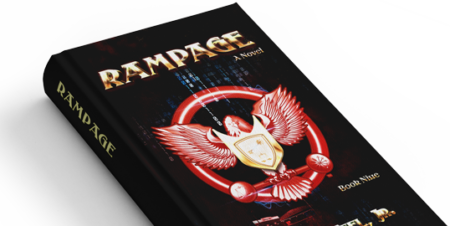 Hello to all of my readers,

My newsletter is named the justice files for a reason, and I want to address it that way this week and for the next several issues as well. The events that have been unfolding over the course of the past week between the police killings of seemingly innocent black men and the cold-blooded ambush of 11 Dallas police officers by a well-trained black military veteran strike close to home for all of us. As an author, it is my goal to entertain but also to educate.

The Illusion of Safety

When the average person reads or watches the news, there is the thought that what is happening in another city, state, or country is over there … that viewers are safe where they are. The reality is quite the opposite. If there is one thing that the Iron Eagle Series is about it’s dealing with reality through fiction. Novel after novel (I am writing book eighteen in the series right now), I deal with real world subject matter. Yes, it is written as fiction, but anyone who has read the series up to its currently released title, “Rampage: Book Nine,” knows that the things that have happened in the first nine books have and do really happen every day. The series is meant to show all of us what it would be like to be in the wrong place at the wrong time and the horrific potential ramifications of the same.

The Realities of Life

The Eagle Series brings my readers into the savageness of humanity. It gives readers a chance to peek behind the curtain at things that are really happening in the world … from the safety of a novel.  The subject matter of the Eagle Series is as vast and varied as the stars in the sky – kidnapping, serial killers, domestic terrorism, pedophilia, rape, torture, prostitution, sexual slavery, drug trafficking, police corruption, cults, mass killings, cyber bullying, rampage killings, political corruption, and the devastating power that religion has over even the most rational person – and the list goes on.

As an author, I venture ever deeper into darker subject matter in each novel. There are moments where even I become worried and afraid. It might be fiction, but I do a tremendous amount of research while writing each novel so that I can make each one not just believable but also as close to a ‘True Crime’ novel as you can get without the books being nonfiction.

The Upside of Writing a Series of this Size and Scope

One of the things that I truly love about writing this series is the characters that I get to interact with and the inclusiveness of their relationships. ALL lifestyles are embraced in the Eagle Series – straight, gay, lesbian, bisexual, transgender – and all are respected and nurtured. There is an underlying love story between all of the main characters that grows stronger novel after novel as the series matures, and there is a natural maturation of characters and relationships that I feel is important to bring to the world.

The Eagle Series deals with heavy subject matter, but as the author, it is also my goal to interject humor as well as the positive side of humanity while at the same time giving my readers a reason to pause and think about what they just read.

If you are a true fan of the series and have read all the novels to date, then you know that all you have to do is read or watch the news and you see everything that happens in my fiction playing out in reality every day. For me, when I read a news story or turn on the news and see my fiction unfolding in reality, it is very, very unsettling, yet at the same time it inspires me to write novels that draw attention to our socioeconomic disparities as well as the deep divides in this country, from race relations to political and social situations that while not new, allow for a more openly narcissistic society with the advent of all forms of social media. I deal with this novel after novel in new and, I hope, unique ways that are both entertaining and thought provoking. I’m not a religious man, but I do keep those who are suffering in my thoughts and try to learn what I can as an outsider looking to write novels in the series that offer answers, not more questions.

PS: If you’re enjoying the Eagle Series please forward this newsletter to your friends whom you think will like the series as well.